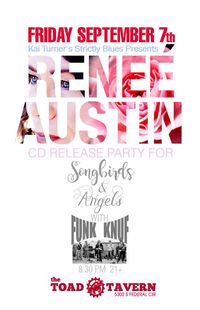 Reneé Austin is an American soul, R&B, gospel, singer, songwriter, actor and speaker. She is a six-time Minnesota Music Award Winner including 'Female Vocalist of the Year'. Austin has a wide vocal range, and has opened for Los Lobos, Tower of Power, Delbert McClinton, Blues Traveler, Big Head Todd & the Monsters, Keb Mo and more. She released three albums between 1997 and 2005, and supplied backing vocals on Tommy Castro's 2005 album, Soul Shaker. Austin was also part of a group of women who performed in Morgan Freeman's PBS Blues Divas, as well as singing for a live WWE season premier, whose television audience was six million. Her singing voice has been compared by critics to those of Mavis Staples, Tina Turner, Gladys Knight, Anita Baker, Regina Belle, and also as a female version of Michael McDonald.

The Philadelphia Inquirer commented that she "embraces a deliciously wide range of roots styles: She swings nimbly on R&B, and fires off some rousing gospel. For good measure, she also shows she can take it uptown with a sultry, soulful ballad."

It was announced in 2005 that her career was finished as following thyroid surgery, she was left with a paralyzed vocal nerve that made speaking and further singing impossible. However, after years of inaction, her voice was miraculously restored. In 2015, Austin returned to performing. She now hos one of her most beautiful recordings to date selling better than ever in 2018..."Songbirds and Angels". DON'T MISS HER COLORADO RETURN!!!